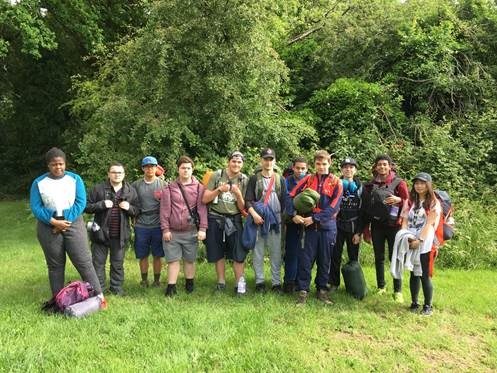 Over the past weekend, a small number of pupils in Year 12 alongside Mr. Parker, Mr. Dean and Ms Roberts partook in a short camping trip in practice for their up-coming Duke of Edinburgh Expedition.  Upon arrival at their destination at Caterham, the students designated two groups that would individually make their way towards the campsite based at Purley John Fisher Rugby Club, whilst taking a predetermined route and completing a number of “objectives” with the additional help of Mr. Gilchrist. The town of Caterham, whilst abundant with hills and slopes to traverse, was a very peaceful and calming location – a welcome stress reliever from the recent exams Year 12 had sat. We assume that Caterham is quite a common location for Duke of Edinburgh expeditions to occur, as along the way students were occasionally asked by local residents about the expedition they were currently conducting and were eager to share past experiences of their own during their years of The D of E programme.

After the tiring six-hour walk, further burdened by the equipment each participant was carrying, we were relieved when we finally approached the campsite and tried to quickly begin construction of our tents, which unfortunately took several hours to complete, due to some confusion regarding the components of the tents and their construction.  After the task was complete, the students indulged themselves in a couple of games of rounders which both ended in draws, much to the chagrin of the two teams; though the occasional mishaps of small accidents and humorous ball handling provided much entertainment for the group. Tired from the day’s activities, students retired to their tents and attempted to cook a meal using trangias, which suffice to say, resulted in “barely edible” food, which was perhaps to be expected, due to cooking inexperience, especially with camp cookers…. Shortly after, students began to return to their tents to sleep for the night, or until early morning…

Pictures of our trip are in the Gallery on the Website.